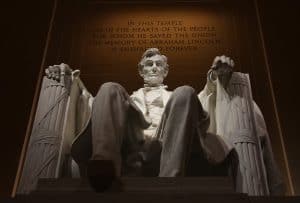 Most people hear the word bankruptcy and assume the worst. But, what most people don’t realize that a bankruptcy can be a fresh start. In fact, did you know that President Lincoln filed for bankruptcy in 1833 before he became president?

President Lincoln co-owned a general store with a friend. They purchased their store’s inventory on credit, but the sales were not as good as expected. For this reason, Lincoln and his partner ended up owing money. While Lincoln ended up selling his shares in the general store, he became liable for back payments when his business partner died. He did not have the $1,000 in back payments, which would add up to about $25,000 today.

Bankruptcy laws were very different in Lincoln’s time. So, when the creditors came after him he needed to give up a horse and some surveying gear, which were his only assets. In addition to giving up his assets, he was also required to make payments to creditors for the next 17 years. However, after his bankruptcy, he went on to become one of the nation’s most beloved presidents.

Ready to Take Your Next Steps Towards Success?