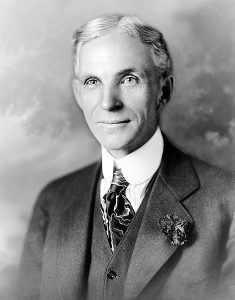 When you think of Henry Ford, you probably think about the Model T or the Ford Motor Company. What you may not know is that he found himself in financial trouble several times. In fact, he filed for bankruptcy twice.

As a talented engineer, Ford decided to focus more on his inventions and created the Detroit Automobile Company in 1899. Unfortunately, he could not balance the management of his company’s finances while working on his vehicles. He filed for bankruptcy after he was unable to repay his investors.

Years later, he reopened his company under a new name, the Henry Ford Company in 1901. He found difficulty with marketing and branding, which resulted in more financial difficulties for him and the company. Unable to repay his debts, he filed for bankruptcy again.

After his second bankruptcy, Ford opened his company under the name Ford Motor Company in 1903. This time, he was able to succeed in his motor vehicle and company goals. His legacy lives on today, all because he used the second chance that bankruptcy provided him to rebuild his life with a fresh start.

Are You Ready to Take Your Next Steps Towards Success?